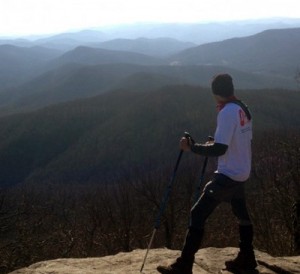 In 2013, a record number of Appalachian Trail thru-hikers – three dozen – signed up with HIKE for Mental Health.

On July 13, the first of our hikers crossed the finish line! Congratulations, Andrew “AYCE” Rice!!!

Andrew raised $2,181 with his hike – one dollar for every mile he walked on the AT.

And by wearing his HIKE for Mental Health shirt, he also helped spread awareness and reduce the stigma associated with mental illness.

After his hike, our own Tom Kennedy caught up with him to ask about his adventure.

Interview with AT thru-hiker Andrew Rice

Tom: Andrew, let’s start with a little background. How old are you, where are you from, and what got you interested in hiking the Appalachian Trail?

Andrew: I’m 25 years old from the Boston area. I became interested in the Appalachian Trail as a kid when I started doing some day hikes in the Whites in NH. In college I decided to eventually attempt a thru hike because I was interested in the challenge aspect of it, and it seemed like a good way to test myself physically and mentally.

Andrew on the AT

Andrew: In the process of preparing for my hike I had been interested in hiking for a good cause and since I knew a thru hike would generate awareness I wanted to help in some way. In researching different organizations, I came across HIKE for Mental Health when searching for organizations specializing in mental illness research. The more I read about HFMH’s initiatives and goals the more I realized it would be a perfect fit for me to help sponsor. I decided to include HFMH because I believe mental illness is a serious and common problem worldwide, and I have seen the effects of mental illness from people close to me.

Tom: Changing the subject a little, how much preparation did you do for your hike? I’m talking about gear and physical training as well as mental preparation for taking on such an adventure.

Andrew: For preparation I had done quite a bit of research on gear mostly in reading books on the AT and advice from past thru hikers. I tested the equipment out in day hikes in the Whites to see what worked for me. Previously to the thru, I had only done one overnight hike, so my experience going into Springer Mtn was lacking. I did not do much for physical preparation aside from a few day hikes and going to the gym a few days a week. Most of the physical fitness came during the first month on the AT, traversing over the southern mountains. Mentally, my only preparation was to expect for the worst, regarding pain, discomfort, and bad weather.

Tom: I’d like to talk a little more about the mental aspect of the hike. Were there any times where you thought, “what am I doing?” Did you feel like cutting it short? If so, why? And what made you stick it out?

Andrew: I had plenty of instances where I would question the purpose of why I was doing the hike, but I never seriously considered quitting. I knew I might not get this opportunity again, and I felt I’d be letting myself down as well as those supporting me through the journey. I give a lot of credit to my friends, family, and especially my girlfriend for helping my physically and mentally when times got rough. Being a sponsor for HFMH also helped me because I felt that I was hiking for a good cause and couldn’t quit on it. 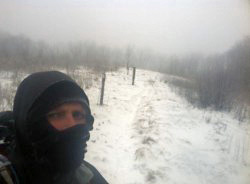 A snowy start to Andrew’s thru-hike

Tom: Let’s talk about the beginning of your hike. With the cold weather, rain, and the novovirus plaguing many NOBO thru-hikers this spring, it was a very tough start for many. How was it for you? Did you get the virus? How did you cope, physically and mentally, with the weather?

Andrew: The beginning of the hike was extremely difficult mostly due to the weather. My first night on trail had a thunderstorm followed by blizzard-like conditions when the temperatures fell overnight. When we made it to the Smokies, we hiked through snow all the way until Virginia. I was able to cope with the bad weather by sticking with a group of hikers (about 15 of us). The group dynamic helps deal with the mental strain because we all were suffering together and knowing that you weren’t alone helped. Hiking in the cold was bearable, it was the cold nights at camp and waking up to frozen boots that really made it tough. Mentally it was all about taking it one day at a time and setting short term goals (next town, point of interest, etc) and knowing that the weather will eventually improve.

I was in Erwin, TN when the first outbreak of the norovirus hit. I was never affected but was around a few who were. Naturally, I and other hikers pushed on bigger miles to separate from those infected.

Check back next week for the second half of Tom’s interview with Andrew. And once again, thank you, AYCE, for making HIKE for Mental Health a part of your thruhike.