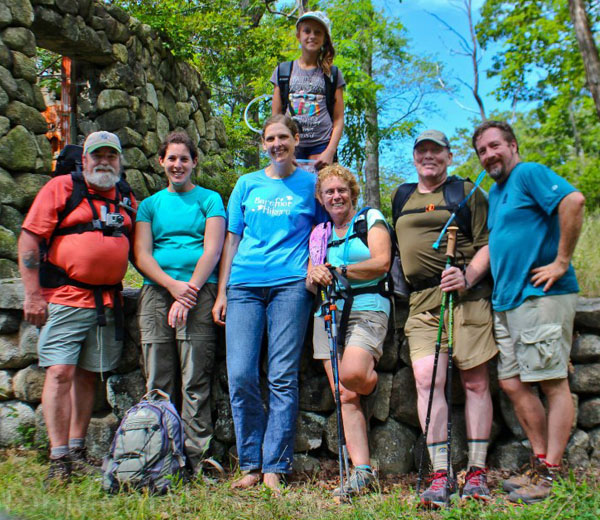 “One of the most enjoyable hikes I’ve ever done.” Those were the words used by participants on HIKE for Mental Health’s August 26 nine-mile loop hike in Harriman State Park, which raise more than $1,700 from ten sponsors and seven hikers. Following is the hike narrative from hike director, Tom Kennedy: 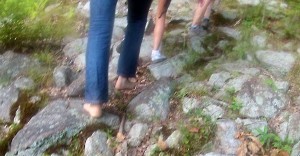 We all met in the parking lot in Harriman Park around 7:45. We were a group of seven, including Susan Letcher of the Barefoot Sisters, who hiked the whole 9 miles – how else? –  barefoot.

After our introductions in the parking lot, we were on our way around 8 a.m. The first half of this hike is somewhat challenging but the vistas were all worth the trouble. 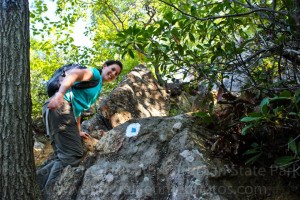 When we got to the 80 foot vertical climb, I said, “My niece, Kennedy, will lead us up this climb.” I said this because, if anything happened to her, there were six people behind her so the odds were that one of us would catch her!

But there was no need for my concern; Kennedy being half monkey is a natural born climber. In fact, one of her teachers told my sister, “Kennedy is not happy unless she is hanging upside down.”

Kennedy was more than up for the challenge of the climb. I know that because half way up, there was Kennedy sitting down on the top enjoying the view.

After a short rest, we were on our way again. We had two more peaks to climb, and after the second one we again stopped for a much needed rest. 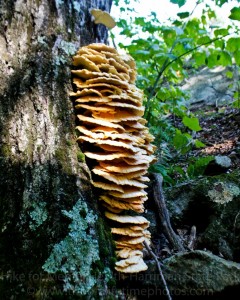 Mushrooms along the trail.

Once under way again, we began descending into a notch. I remembered a cool mushroom formation on a tree and mentioned it to martin to see if he wanted to take a picture. That’s when he remembered he left his trekking poles at our last rest spot.

When I caught up with rest of the group at the summit, everyone was in a great mood, enjoying the day. 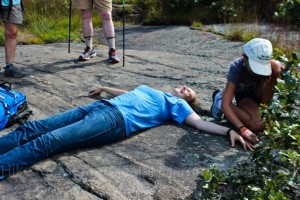 After Martin showed up, Kennedy decided to do a chalk outline of Susan lying on a large flat rock. I think she used sweet tarts for chalk!

As we were heading down our last decent, Deb asked me, “When does this downhill end?” I told her, “At the bottom.”

When we got to the bottom, I told everyone that the rest of the hike is mostly flat and all the hard stuff was behind us. So we headed up the Pine Meadow Lake Trail. 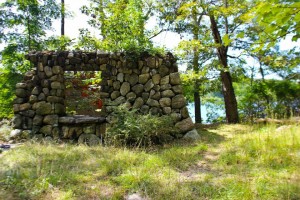 Ruins of an old pump house.

We took a short break at the lake, then continued around it until we reached some old ruins. They are the remains of an old pump house built in 1934. There, we ate lunch, and Deb took a nap.

After a nice lunch, we were on the move again. When we reached the Conklins Crossing Trail, things got interesting because at that junction we turn right onto an unmarked trail.

It is a very pretty trail and sometimes you are walking on top of a rock wall that has an exposed pipe running along the top of it. It can be a little hairy at times. Keep in mind Susan is doing this barefoot.

We finally come to a small rock road and we head to the right a short distance toward the lake and we pick up a trail again which takes us to the camp that they had when they were building the dam to make the lake. The only thing left is an old rock fireplace. We had scouted this area the week before so I knew where we were going, but how I found this part of the trail is amazing. Some thought I was nuts, but I assured them I was going the right way.

In a very few minutes we were at the Conklin Cemetery. We were all walking around, looking at the head stones, when paul made a joke about how many dead people are in the cemetery. “All of them,” he says. And Susan quickly answeres, “Not yet.” After we all stopped laughing, we headed on.

Are we on the path?

Now, this part of the trail is very hard to find; hardly anyone uses it. I have seen much better deer trails but we were only on it for about ten minutes. Soon we are back at the rock road. The road runs like a horseshoe and in twenty minutes more we were back at the place where we started our hike around the lake. 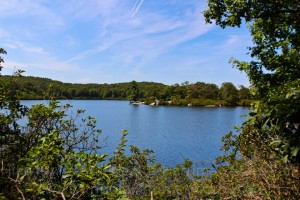 Kennedy fed her last sandwhich to the fish while Susan soaked her feet, and the rest of us watched as people were jumping off the rocks into the lake across from us.

As we left the lake we only had about an hour or so left of hiking. The only thing I do not like about this hike is that the last hour of it is on the most hiked trail in the whole park. I call it the highway.

We all hopped in our cars and drove to Rhodes Restaurant in Sloatsburg, NY,  where we met my sister (Kennedy’s mom) and Leo and Nancy. We had a nice lunch and I passed out copies of Susan’s books to all the hikers. Susan signed all of them. In turn, I gave Susan a copy of the Barefoot Sisters’ book that we had all signed for her!

A festival of spontaneous tree-hugging breaks out on the hike.

I want to take a moment to thank all the hikers on this trip and all the people who donated to them for this hike. When I tell you I have never been on a more enjoyable hike, I mean that from my heart. We had a great mix of people, the weather was great, and I picked a great hike, if I do say so myself. 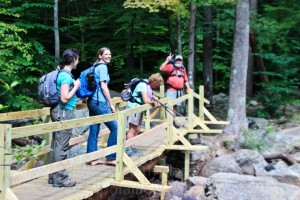 A special thanks to Susan “jackrabbit” Letcher. If any of you who are reading this have ever hiked with her, then you know what a remarkable woman she is and how much fun she is to hike with. I’ve always said that inside every hiker is a big kid, and Susan is no exception. I can’t wait to hike with her again sometime, maybe to Sunfish Pond on a beautiful foggy October morning, after not having to walk too far to get there.

Click here for the full photo gallery – with special thanks for photographer extraordinaire, Martin Hunley.