Following is a letter to the Editor of the New York Times from Dr. Jeffrey Borenstein, president of the Brain & Behavior Research Foundation, the primary beneficiary of our fundraising efforts. He explains well why we do what we do. Emphasis added.

In the area of psychiatric illness, private philanthropy has proved essential. Mental illness affects one in four people, cutting across all racial and economic divides.

Funding innovative neurobiological research is leading to a better understanding of the brain and new treatments. But basic research often lacks the “glamour quotient” that attracts philanthropists.

That is why we believe that we have found a funding model that can work for others. Our research grants are awarded to scientists, including young investigators, by a Scientific Council that comprises 146 leading experts across disciplines in brain and behavior research, including two Nobel Prize winners. Our donors, who give at all levels, look to them as trusted advisers in selecting the scientists they support.

Over 25 years, this collaboration between donors and scientists has awarded more than $300 million to thousands of researchers doing the kind of cutting-edge research that changes lives.

Read the article: “Billionaires With Big Ideas Are Privatizing American Science” from The New York Times. 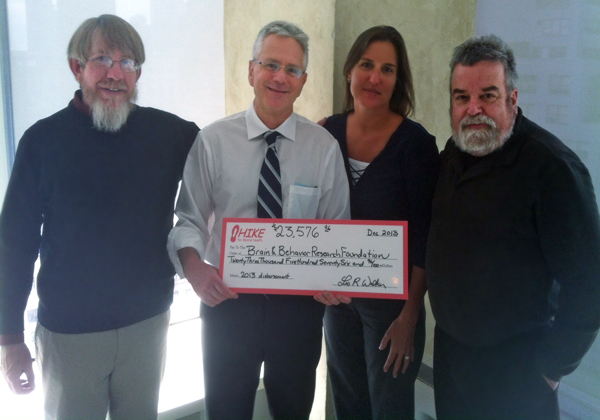 Leo, Nancy, and Tom present the 2013 check for more than $23,000 to Dr. Jeffrey Borenstein of the Brain & Behavior Research Foundation