On July 13, 2013, Andrew “AYCE” Rice became the first AT thruhiker to summit Katahdin as part of HIKE for Mental Health. With his hike, Andrew raised more than $2,000 for mental health research and trail preservation. Congratulations, AYCE!

Below is part two of Tom’s interview with Andrew after his tremendous adventure. (Read Part 1 of the interview.) 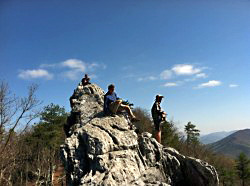 AYCE atop Dragon’s Tooth in Virgina

Tom: Let’s talk about Virginia. Virginia’s 500+ miles are the most of any state on the AT. Some hikers hit what has been dubbed the ‘Virginia blues.” Crossing a state line is an exhilarating feeling, but trudging on week after week through Virginia is hard for some hikers. How did you find that stretch, and how did you keep your spirits up?

Andrew: I had heard about the Virginia Blues prior to the hike but never truly experienced it, and I think it was due to a few factors. First, when I entered the state we finally hit our first stretch of nice weather. It really lifted all our spirits once we reached Damascus and beyond. Second, the terrain was nice and certain areas in southern VA were some of my favorite parts, especially the Grayson Highlands. Third, the group of hikers I was with really bonded in VA and sticking with them really helped distract from the never ending miles in the state. Further into the state (near the “Roller Coaster”) I did feel anxious to leave VA, but the ‘blues’ never sunk in until later in the journey. I think I encountered more of the Mid-Atlantic blues than Virginia blues due to the fact that I was more isolated from PA to MA.

Tom: During a hike of this magnitude there are a lot of ups and downs, physically as well as mentally. Can you pick out one particular experience during the hike that gave you a mental boost and helped recharge your spirits? 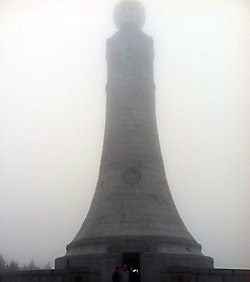 AYCE on the summit of Mt. Greylock in Massachusetts

Andrew: The day I hiked Mt. Greylock in MA was the day that gave me the boost to go on and finish. That day ended a two week period where I did not hike with anyone else, and the previous week of rain added to my declining attitude towards the whole hike. My parents and girlfriend visited me at the base of Greylock which was a great moment, and then at the summit I surprisingly met a few hikers I had met in North Carolina earlier in the trip who happened to have the same end date in mind (July 13). I had decided that day to hike the rest of New England with them. Being reunited with family and friends and fellow thru hikers gave me the mental boost I was in need of.

Tom: Andrew, this is a two part question. Katahdin is the climax of a NOBO’s hike. What was it like when you saw Katahdin off in the distance for the very first time, knowing your hike was coming to an end? The end of a thru hike is a very emotional moment; can you share with us your feelings? Was anyone with you when you ultimately summitted? Describe what was going through your mind the time you first saw, then touched, the sign.

>Andrew: Climbing Katahdin was a day I will certainly never forget. I decided to hike the mountain alone, letting my hiking partners leave an hour before with their families. As I got to the Tablelands and saw the end for the first time, it was a feeling I can’t really describe. I actually stopped on the trail for about 20 minutes partly to take a second to reflect and partly to wait while my friends and girlfriend approach the summit from the other side of the mountain to meet me. When I got to the sign there were about 50 people clapping as I was greeted my girlfriend and touched the sign. The whole experience at the summit was a blur to me. I was so overwhelmed with so many emotions that I was practically in a daze. It was one of the greatest moments in my life. 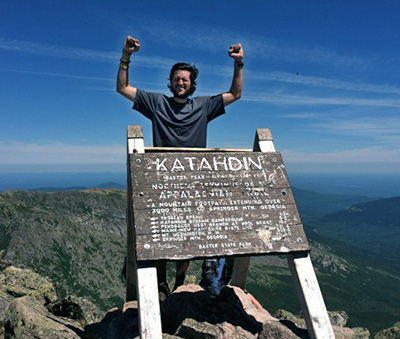 Tom: For many, a journey like this is a life changing adventure. How do you think this journey has changed you? What’s next for you in life, and in hiking?

Andrew: I think this journey has changed me in that it’s given me self confidence and the realization if you’re passionate about something, you can accomplish it. I don’t know what’s next for me in life but if I learned anything from the hike its that I don’t worry about the past or distant future much but try to focus on the now. For me, right now is about settling back home and figure out what I want to do next. As for hiking, I think I’ll take a long vacation from it.

Tom: And finally, do you plan to turn your journal into a book?

Andrew: I probably won’t turn the journal into a book. There are a lot of common books and journals about the AT out there. If I were to ever write about my experiences I think I would emphasize the areas that are less documented such as the constant terrible weather and my run-ins with injuries and poison ivy.

Thank you, Andrew, for making HIKE for Mental Health a part of your amazing experience. Whatever you choose to do in life, we know you will be a great success. Happy trails!

Create your own HIKE for Mental Health

To make HIKE for Mental Health a part of your own hiking adventure, whether it be 2,000 miles or 2 miles, just register it here for free. It will make you feel even better about hiking and will help do good for others along the way.