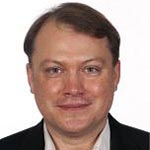 A diagnosis of schizophrenia is often preceded by a “prodromal” phase of the illness, in which milder symptoms are present for weeks or even years before developing into full-blown psychosis. With the use of brain imaging technology, a study funded in part by a Brain & Behavior Research Foundation NARSAD Young Investigator Grant to lead author Scott A. Schobel, M.D., shows that elevated levels of the neurotransmitter glutamate in the hippocampus region of the brain may cause the transition to psychosis in people at high risk for developing schizophrenia. The study was published April 10, 2013 in Neuron.

Dr. Scott Schobel of the Department of Psychiatry, Columbia University Medical Center, and team used neuroimaging to examine the hippocampus of people who sought psychiatric help for symptoms like mild perceptual hallucinations or delusions that did not reach the threshold of full psychosis. The study volunteers were imaged twice—at the beginning of the study, and again nearly 2.5 years later, after 40% of the subjects had been diagnosed with a psychotic disorder.

In the patients who later developed psychosis, increased glutamate activity was associated with some hippocampal abnormalities during the prodromal phase, but these abnormalities were much more pronounced following a diagnosis. In addition, the degree of hippocampal abnormality during the prodromal phase could be used to predict the amount of time before a patient developed psychosis. Taken together, the findings strongly suggest that increased glutamate activity can be an early warning sign for hippocampal dysfunction that will progress during the transition from prodromal to full-blown psychosis.

The researchers also tested the mechanism behind these alterations using brain imaging in animal models, finding that increasing glutamate activity  also produced similar patterns of hippocampal abnormalities—and schizophrenia-like symptoms—in rodents. This suggests that controlling glutamate levels in high risk individuals or those in the early stage of illness could be an effective preventive and/or therapeutic strategy.

Watch the study abstract video and read the abstract in Neuron