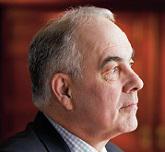 Some scientists suspect that the debilitating symptoms of schizophrenia  emerge from problems with a brain chemical called glutamate. Although glutamate drives much of the electrical signaling between neurons, evidence suggests that in schizophrenia the proteins receiving the glutamate message do not fully absorb its impact.

A new study by Brain & Behavior Research Foundation Scientific Council Member and NARSAD Grantee Joseph T. Coyle, M.D.,NARSAD Grantee Vadim Y. Bolshakov, Ph.D., and colleagues at Harvard-affiliated McClean Hospital offers the possibility that D-serine, a simple compound that boosts glutamate signals, can remedy this situation.
The research, published May 31, 2013 in Proceedings of the National Academy of Sciences, was conducted by creating and studying mice models with underactive glutamate signaling. The researchers found brain abnormalities in the adult mice that have been associated with schizophrenia, including signs that neurons were less able to adapt to change. Injecting the mice with D-serine for 20 days restored their glutamate signals to normal levels, and normalized other markers of a neuron’s ability to change and form connections with other neurons. D-serine also corrected a schizophrenia-like memory problem in these mice.
The results offer hope of a new treatment target for schizophrenia because they show that a long-standing, genetically-based problem with glutamate may be remedied in adulthood. If the human brain retains a similar response to D-serine in adulthood, this may bode well for clinical trials of compounds that are currently underway.
Read more about this finding in Brain & Behavior Research Foundation-sponsored Schizophrenia Research Forum
Read the study abstract