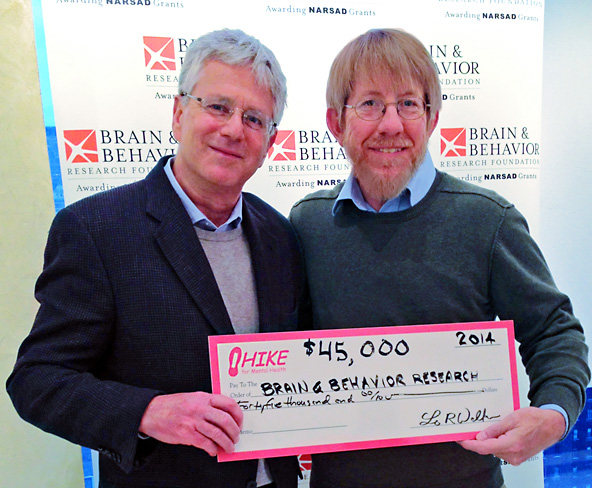 With Tom hiking the Florida Trail, Nancy wrapped up in her day job, and Diana buried under record-setting snow in Maine, the pleasure of our annual meeting with the Brain & Behavior Research Foundation team fell to Leo.

Over the past three years, we have contributed nearly $75,000 to the Foundation’s research grants programs. In 2014 alone we disbursed $45,000 to this remarkable organization committed to alleviating the suffering caused by mental illness by awarding grants that will lead to advances and breakthroughs in scientific research.

Since 1987 the Brain & Behavior Research Foundation has awarded more than 4,780 NARSAD grants to more than 3,700 scientists around the world, leading to paradigm-shifting discoveries. For example, it had long been accepted within the medical community that we cannot grow new brain cells after the age of about two. Ground-breaking research funded in part by a grant from the Brain & Behavior Research Foundation led to the amazing discovery that we can in fact grow new brain and nerve cells even as adults. “Exercise can play an important role in stimulating this neurogenesis,” explained Dr. Borenstein, “and among the best exercises for stimulating neurogenesis are hiking and walking.”

Of course, hikers have long known the physical, mental and spiritual benefits we gain from our time on the trail. But now we know we also helping to keep our brains young by stimulating new brain cell growth. Beyond our day-to-day health, the discovery of neurogenesis has tremendous potential for new treatments for depression, Parkinson’s, schizophrenia, and other illnesses.

The Brain & Behavior Research Foundation was willing to fund this un-orthodox idea at a time when it was assumed that brain cells could not regenerate.

This type of visionary thinking is part of why we are proud to announce that again for 2015, HIKE for Mental Health will dedicate 80% of the money raised through our hikes to alleviating suffering from mental illness, with the largest portion going to the Brain & Behavior Research Foundation.

For the first time in 2015, we will also begin to direct a small percentage of funds we raise to develop our own programs to eliminate the stigma associated with mental illness. More details on that plan will follow in the coming.

We thank Dr. Borenstein and the entire Brain & Behavior Research Foundation team for their continuing commitment to alleviating suffering from mental illness. 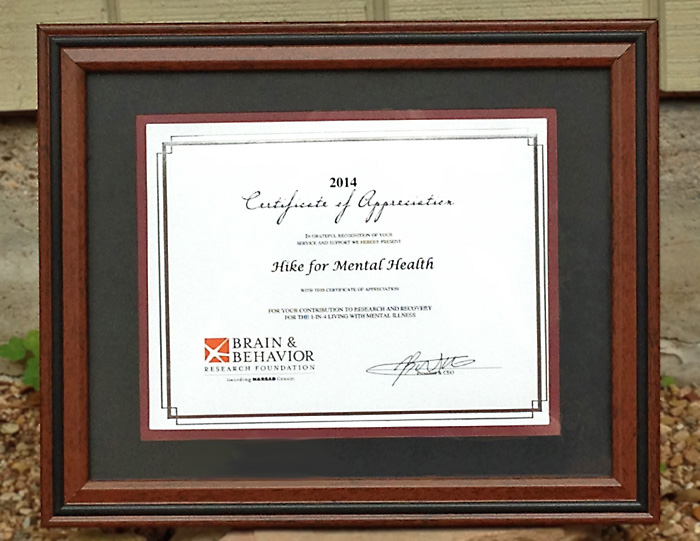 Dr. Borenstein presented us with this Certificate of Appreciation.