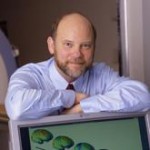 The interaction between genes and the environment have long been known to influence the brain and behavior. The cerebral cortex, the most highly evolved human brain structure, changes dramatically in thickness during the first 25 years of life. Long-term in vivo studies of human brain development have demonstrated the extraordinarily dynamic nature of the cerebral cortex throughout the early years. These cortical changes are highly heritable and critical to higher brain function and to individual differences in thinking and behavior. However, how the gene/environment interactions affect specific brain regions in specific ways at specific times in development has not previously been characterized.

In the research, reported on April 21st online before print in the Proceedings of the National Academy of Sciences (PNAS), 1,748 anatomic magnetic resonance imaging (MRI) scans from 792 healthy twins and siblings were studied with up to eight time points per subject. Using 81,924 measures of cortical thickness, the changes in the genetic contributions to cortical development were observed across the age range of three to 25 years.

During the transition from childhood to adulthood, genetic factors play an increasing role in regions involved in improving cognitive abilities and in regions involved in illnesses, such as schizophrenia, that emerge in adolescence. Because, as the researchers state, “individual differences in brain structure and function provide the biological substrate for population variation in cognition and behavior,” findings related to cortical changes “further our sparse understanding of how genes help to shape the brain after birth.”