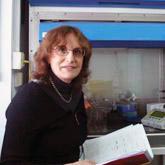 Brain & Behavior Research Foundation NARSAD Grantee Dorit Ben-Shachar, D.Sc., of the Rambam Health Care Campus and the Technion Israel Institute of Technology (TIIT) in Haifa and team reprogrammed human hair follicle cells to produce what are called induced pluripotent stem cells (iPSC) ―cells in a primitive developmental state that can be coaxed to mature into any one of a number of different cell types, including brain cell types and functional neurons. Since brain cells cannot be extracted from living subjects or “biopsied,” this cutting-edge new technology opens a vast new window to identify what malfunctions in brain cells in mental illness. In this case, the research team used the cells to study neurodevelopmental abnormalities in schizophrenia. Their findings were published June 4, 2013 in Molecular Psychiatry.

Hair follicle cells originate from the same embryonic germ layer that gives rise to neurons, and thus represent an attractive source of iPSC that can be reprogrammed into neurons. In 2011, Dr. Ben-Shachar’s  previous Brain & Behavior Research Foundation-funded study, showed that it was possible to take hair follicle cells from healthy human donors and reprogram them into iPSC that were then grown into neurons of various lineages. In the current study, her team reprogrammed hair follicle cells from three schizophrenia patients and two healthy subjects into iPSC that later developed into neurons to study neurodevelopmental-related changes in the brains of people with schizophrenia.

Dr. Dorit Ben-Shachar heads the Research Laboratory of Psychobiology, the Division of Psychiatry, Rambam Health Care Campus and the Faculty of Medicine at TIIT. She and her team found that neurons derived from the reprogrammed hair follicle cells of schizophrenia patients showed various abnormalities, including the inability to differentiate and mature. They also found that these cells had defective mitochondria, a specialized cellular structure that uses oxygen to generate energy for fueling cellular metabolism. Mitochondrial dysfunction has been observed in various brain disorders, including Alzheimer’s, Parkinson’s disease and schizophrenia. This study demonstrates that mitochondrial function is important for neuronal survival and development.

These results spotlight how emerging new technologies are vastly improving the capacity to identify and understand brain function and what and how malfunction can cause mental illness. Moreover, identifying a specific malfunction can delineate a biomarker for the disease, thereby improving treatment and helping fight social stigma.

Read the announcement from the Brain & Behavior Research Foundation

Read more about this study abstract in Nature – Molecular Psychiatry

See the findings of this study in this image