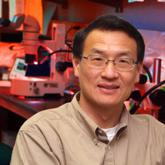 A new study by Brain & Behavior Research Foundation NARSAD Grantees Lin Mei, M.D., Ph.D., Dong-Min Yin, Ph.D., and Graham Bean, Ph.D., of the Medical College of Georgia and their colleagues found that when they restored “normal” levels of a gene whose over expression is known to be associated with the development of schizophrenia in some patients, behavioral symptoms were corrected. In the process, using animal models, they also identified a previously unknown potential pathological mechanism (an enzyme called LIMK1) that was triggered by over expression of the Neuregulin 1 (NRG1) gene. The study was published May 22, 2013 in Neuron.

Schizophrenia is thought to stem from derailed brain development that has lasting consequences into adulthood. Much like a bad foundation can weaken the structure of an entire house, research suggests that the subtle mis-wiring of the brain early in life can cascade into a host of other problems for the brain, and increase a person’s risk for succumbing to schizophrenia in early adulthood. In some cases, this faulty wiring has been linked to high levels of Neuregelin 1 gene levels.

Senior author Dr. Lin Mei from the Medical College of Georgia at Georgia Regents University explains the team’s work: “They genetically engineered mice so they could turn up levels of NRG1 to mimic high levels found in some patients then return levels to normal. They found that when elevated, mice were hyperactive, couldn’t remember what they had just learned and couldn’t ignore distracting background or white noise. When they returned NRG1 levels to normal in adult mice, the schizophrenia-like symptoms went away.”

Although the brain has less capacity for change in adulthood, the new results suggest that it may be possible to recover, at least in part, from a long-standing malfunction.  This means that therapeutic strategies aiming to fix such developmental glitches could help people who have already developed schizophrenia.

Read the original annoucement from the Brain & Behavior Research Foundation

Read more about the study in Sci-News.com

Read the study abstract in Neuron