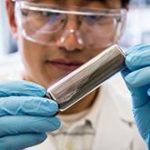 In the first neuroimaging study of its kind, scientists show that long-term lithium treatment for bipolar disorder can positively influence the volume of the brain’s hippocampus in elderly patients. The findings suggest that lithium may protect brain cells in the hippocampus, a part of the brain that plays a central role in memory, including the formation of new memories.

If these results are confirmed in further studies, the researchers write, “psychiatrists could prescribe lithium for a patient not only for its effect as a mood stabilizer, but also as a prophylactic medicine against cognitive decline and dementia in predisposed patients.”

Dr. Busatto and his colleagues say their findings indicate that lithium may have a neuroprotective effect, preventing neural loss in the hippocampus in bipolar disorder patients. Their study adds to the growing body of data showing decreases in hippocampal volume related to a number of psychiatric illnesses, including bipolar disorder and major depression.

Takeaway: Over the long-term, lithium may prevent loss of neurons in the brain’s hippocampus, a study of elderly bipolar disorder patients suggests.