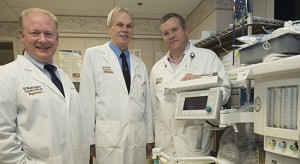 Psychiatrists Charles R. Conway, MD, (from left) and Charles F. Zorumski, MD, worked with anesthesiologist Peter Nagele, MD, on a small, pilot study in which nitrous oxide was given to patients with treatment-resistant depression.

Researchers at Washington University School of Medicine in St. Louis have recently found that nitrous oxide, or laughing gas, has shown promise as a potential treatment for severe depression in people whose symptoms do not respond to typical therapy and medication.

Because as many as one-third of patients diagnosed with clinical depression do not respond to standard treatments, the need for alternative therapies is at the forefront of research efforts in this area. Although the use of nitrous oxide as a treatment for severe depression may seem unlikely, researchers believe that the drug could possibly offer many benefits to those suffering with depression.

According to co-investigator Dr. Charles R. Conway, “When they received nitrous oxide, many of the patients reported a rapid and significant improvement.” Because standard antidepressants such as Prozac, Zoloft, and Lexapro often take several days or weeks to benefit patients, and because the effects of cognitive behavior therapy are not apparent for several weeks, treatments such as nitrous oxide that benefit patients almost immediately are particularly useful in patients who may be at risk of suicide and who need help as soon as possible.

Although additional studies are needed to learn whether this treatment for depression is reliable, the current study provides promising evidence and leaves the researchers and patients hopeful. Many studies will soon begin to test whether these findings are empirical and if so, whether different concentrations of laughing gas influence symptoms of depression differently.

“It’s kind of surprising that no one ever thought about using a drug that makes people laugh as a treatment for patients whose main symptom is that they’re so very sad,” Dr. Nagele said.