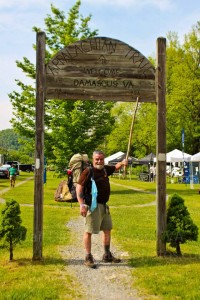 2013 was the first year HIKE for Mental Health went to Trail Days.

As luck would have it, on the same weekend we scheduled a hike at Island Pond in Harriman State Park in NY. Susan Letcher attended the hike, which was jointly sponsored with NJ-NY Active People. With two important events on the same weekend, we had to divide and conquer. And since I hiked with Susan last year while Leo was on our Summit Mt Washington hike, it was decided I would go to Trail Days.  I know – poor me.

The road trip began at 4 am Thursday morning. Our un-official staff photographer Martin Hunley who agreed to accompany me on the trip was right on time. We loaded up my Smart car and off we went. We stopped to fill up twice and to grab a quick lunch, so we arrived in Damascus at 2:30 pm. 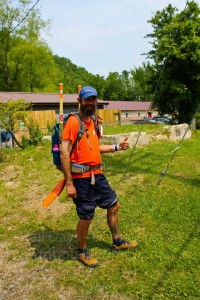 What a cute little town, nestled in the mountains! Nestled is a quaint way of saying “no AT&T phone service.” We were hungry so we started making camp in tent city when suddenly someone says, Nice pack. I turned around, and it was So Way, one of the thru hikers for HIKE for Mental Health!

As the day rolled on, I started to run into more of our hikers and other friends from Facebook. I am on a bunch of Appalachian Trail Facebook pages communing with hikers and promoting HIKE for Mental Health.  What really felt good was having people walk up to me and say, “You’re Tom Kennedy aren’t you?” I’d look at them and say “How do you know me?”  “You’re the HIKE for Mental Health guy.” This continued over the whole weekend. And really made me realize how much people are paying attention and liking what we are doing. I can’t describe what a great feeling that is.

Upon returning to tent city at night, it was almost surreal – a field with over a hundred tents, the mountain lit up with camp fires glowing, the sound of music, and hikers hooting and howling from the woods and the mountain. It was like something out of a Star Wars movie. There was a huge bonfire Friday night, and it was wonderful hanging out with such great people.

On Saturday we all lined up on the Main Street for the parade. All the marchers have water guns and all the spectators are armed also. At the end of the parade everyone is soaked.

Then it happened. Police came by and told everyone to get on the sidewalk because they needed an ambulance to get through. All hell broke loose with cops screaming,  “Get off the street; the parade is over.” A few minutes later rumors were coming down that a car mowed into the back of the parade. We were hearing that there were fatalities and many, many injured.

I thought of my friend Leah who I had been trying to find all weekend. I started walking down the street toward the accident. Helicopters were now circling and it was crazy.

So we headed back to the Mill. We had no cell service, but the town has WIFI. So I went on Facebook and got a message from someone named Cindy. “Tom, where are you? This is Leah. I’m okay. I’m using a friend’s phone.” I told her I was at the Mill. She said she would be there in twenty minutes.

Twenty minutes later I was having the biggest hug I have had in years.

That night Martin and I turned in around ten. We both really didn’t feel like partying that night. And in the morning we headed home with heavy hearts. But in peace that we do knew no one had been killed. 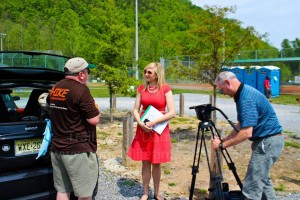 While standing on the curb. Big Red came up to me wearing his HIKE for Mental Health shirt. I said, “Big Red, you’re raising a heck of a lot of money for the cause. How do you do it?” He said, “I have know idea. I must have good friends.” 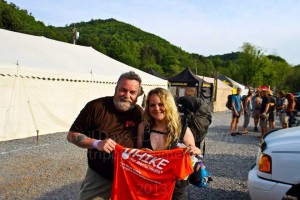 Good friends everywhere. I was truly quite surprised at how many people knew about HIKE for Mental Health. I think the one that surprised me the most was at a wedding in a tent. As I was walking out, this woman grabbed my arm and pulled me back. “Tom Kennedy, I’m class of 2012 and not only do I love what your doing, I want to help.” This is what I kept running into all weekend. Even some vendors said, Thanks for what your doing. And people who are not hiking for HIKE for Mental Health kept coming up to me and saying hi. Some saying they are sorry that they are not hiking for us.

The other thing that I find incredible is how many people come up to me and tell me how they or a family member suffers from mental illness, and how they are so happy that someone in the hiking community wants to make a difference.

And that’s exactly what we want to do. Make a difference. When I am long gone, I hope that HIKE for Mental Health is still making a difference. We all need to work to eliminate the stigma that goes along with mental illness. I think if I had to choose between suffering from mental illness, or the stigma of mental illness, I would chose the illness. Many times that can be corrected with medication, and as our understanding and scientific research advances, treatment are and will get better and better. Hey, that’s a big part of why were are doing this, right? But the stigma can be tougher to “cure.” The stigma needs education, to educate people about mental illness. These people who suffer, are our brothers sisters mothers, fathers cousins, friends, and ourselves.

We can all help show people in the right direction. To follow the blaze to knowledge. To understanding, and to research. Together, we will all make a difference.

Which brings me to my final thoughts. This was my first time at Trail Days, which is a celebration of the whole hiking community.  It’s a time for the world to take note of the Appalachian Trail and the hikers who tread on her. A time for people to come together and join in a partnership.

This year I saw nothing but a bunch of great people who love the trail and love to hike, who came together as a group and spend a few days having a great time. Every group has a few bad eggs. And Trail Days was no exception. I was lucky to only see the good eggs. I saw people who picked up other people’s trash and looked out for their hiking brothers and sisters. I saw a very big family that cared about each other and Mother Earth. It was a magical weekend. And I am so glad that I was able to be part of it this year and, I hope, for years to come. 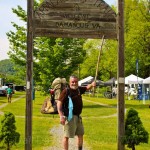 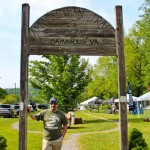 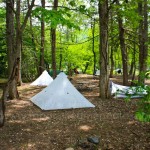 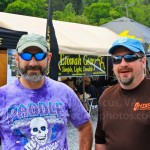 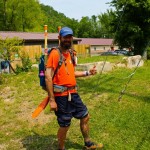 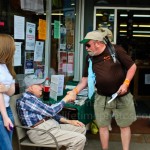 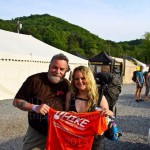 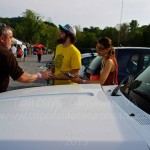 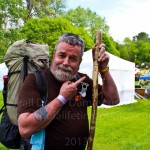 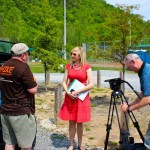 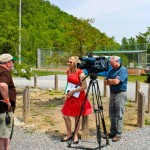 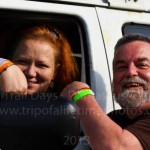 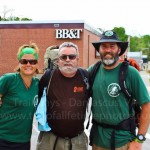 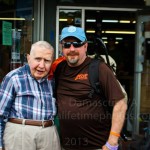 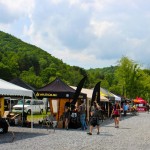