Beginning in 2000, Susan Letcher and her sister Lucy began hiking the Appalachian Trail barefoot from Katahin in Maine. After reaching the southern terminus of the AT on Springer Mountain in Georgia, these Barefoot Sisters turned around and headed north again, eventually completing a yo-yo thru-hike of the AT.

Although Susan and Lucy may not know this, HIKE for Mental Health probably would not exist if it weren’t for them. Let me explain.

I love the Appalachian Trail, and I read every book about it I can find. So when my Kindle recommended The Barefoot Sisters Southbound several years ago, I downloaded it. Once I started reading, I could not put it down until I finished. I started right in on their second book Barefoot Sisters Walking Home, and when I finished that one, I re-read them both again. They are the best two books about hiking on the AT I have ever read.

After reading their books, I took the plunge myself, on a much smaller scale. I bought a pack, drove to the AT in New Jersey, hiked 13 miles (in hiking boots), spent the night in the woods, and hiked back to my car. I could barely walk by the time I made it back to my car but I was hooked. 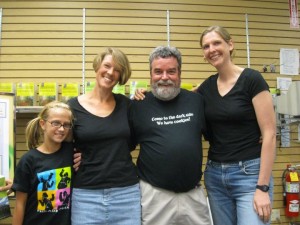 Tom and niece Kennedy at book reading with the Barefoot Sisters

I eventually met the Barefoot Sisters in person at a book reading at Campor in New Jersey, and became friends with Susan on facebook. She motivated me to get hiking again. Without that motivation, HIKE for Mental Health would never have come into being. Thank you, Susan and Lucy.

We are honored that Susan has agreed to give this interview to HIKE for Mental Health. Here now is part part one of this three-part interview with “jackrabbit,” Susan Letcher.

Susan: Actually, hiking the AT was something we planned to do together from the very beginning, or at least from the beginning of the time we made serious hiking plans. I first became aware of the trail from a magazine article when I was 9 or 10. My thought at the time: “wow, six months without my parents!” It wasn’t until I was out of high school, though, that we really began considering it. Lucy and I ended up going on a crazy seat-of-the-pants trip to Peru when I was 17 and she was 20. Everyone else on the trip had hiked the AT at least once, and from their campfire stories we formed some idea of what it would be like out there. We talked about hiking it when we both got out of college.

Fast forward to early spring, 2000. Lucy had been out of college a couple years and was taking some additional classes at University of Maine with the aim of getting into medical school eventually. I was finishing college. An internship that I’d been planning to do fell through at the last minute, and I was left with no plans for the fall. I called Lucy to see if she still wanted to hike the AT. I guess you know how that story turns out.

Anyone who doesn’t know how the story turns out should pick up (or download) a copy of Barefoot Sisters Southbound. Then check back next week for part two of the interview when Susan talks about “one of the hardest things to revisit” from her hike of the AT.

Susan G. Letcher is a tropical ecologist and assistant professor of environmental studies. She grew up on an island off the coast of Maine, in a house with wood heat and cold running water. After earning her B.A. at Carleton College in 2000, she hiked the Appalachian Trail twice (from Maine to Georgia and back again) with her older sister, Lucy. She completed a Ph.D. in 2008 at the University of Connecticut, studying how tropical forests recover from disturbance, and spent two and a half years teaching study abroad programs in Costa Rica. She currently lives in New York.