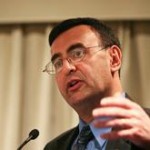 Interview with a Researcher: Getting Patients Better, Quicker

Why do we have to wait six to 12 weeks for an antidepressant medication to kick in, while patients may be contemplating suicide, losing their job and worrying everyone close to them, asks Dr. Carlos Zarate. Why can’t everyone who suffers a major depressive episode get relief in an hour, or within a couple of hours or a few days, at most? If we can accomplish that, he says, “we can subtract from the cumulative time people spend in a depressed state, and thus limit depression’s destructive impact on the brain and overall physical health.”

Dr. Zarate, who studied to be a doctor in his native Argentina, received the first of his two NARSAD Grants in 1996. Foundation support enabled him to study ways of stabilizing patients with bipolar disorder. Then in 2001, he was appointed to be an Investigator in the Mood and Anxiety Disorders program at the National Institute of Mental Health (NIMH).

In 2000, Foundation Scientific Council Members Dennis S. Charney, M.D., Dean of the Icahn School of Medicine at Mount Sinai, and John H. Krystal, M.D., Chair of Psychiatry at Yale School of Medicine (both of whom have had NARSAD Grant support) had described the astonishing effect of ketamine (Ketalar®) on seven depressed patients. Previously, ketamine had been used as an anesthetic. But when given to people with major depression, Drs. Charney, Krystal and colleagues found their symptoms were dramatically reduced within 72 hours. In some, the effect was virtually immediate. While there is not yet a clinically viable medication approved for this use by the U.S. Food and Drug Administration, with Dr. Zarate’s persistent and highly regarded clinical translational research, that milestone may well be met within a few years.

At first, he says, the report of ketamine’s effectiveness seemed so unusual that “some people frankly didn’t believe it.” Ketamine could cause “dissociative” side effects––hallucinations and other psychotic-like symptoms—and it was a drug of abuse. How could it ever be used to treat depression? As a result, research on ketamine’s antidepressant effect was largely abandoned.

Then, in 2006, Dr. Zarate, along with Dr. Charney and Husseini Manji, M.D., a Scientific Council Member and NARSAD Independent Investigator Grantee who was then in the NIMH Mood and Anxiety Disorders program, reported positive results of a clinical trial in which ketamine was given, not just to patients who had been diagnosed with major depressive disorder (MDD), but to those for whom other therapies had failed (“treatment resistant” patients who had tried on average at least six other antidepressants). The onset of response for these patients was within two hours. “Ever since, the field has moved rapidly forward,” Dr. Zarate says.

With continued NARSAD Grant support, Dr. Zarate was able to push his line of research further. He was able to demonstrate for the first time that patients with treatment-resistant bipolar depression can respond to ketamine within one hour. Subsequently, Dr. Zarate’s team was able to replicate this finding in bipolar depression. “The Brain & Behavior Research Foundation has had an important impact on my career and permitted me to pursue a line of research that will hopefully help the field in developing next-generation treatments for our patients that are more efficacious and work more rapidly than existing treatments.”

Dr. Zarate and his colleagues believed that if ketamine was given under carefully controlled hospital conditions, and to depressed people who had run out of treatment options, it might prove to be beneficial. “The key in generating interest in the study of ketamine was when we replicated the 2006 results some time later, and then again in a third study,” says Dr. Zarate. “People really started believing in ketamine’s rapid antidepressant efficacy.” Then, in early 2013, a larger NIMH-funded study with ketamine in treatment-resistant depression was completed and essentially confirmed the results of these earlier studies.

Dr. Zarate’s work has moved to incorporate a diversity of technologies to identify biomarkers of response to rapid-acting antidepressants and to identify the neurobiological changes that are involved in this response. His group employs technologies such as structural and functional neuroimaging, genetics, polysomnography (a type of sleep study) and electrophysiology studies in patients taking part in clinical trials who are being treated with ketamine and scopolamine (Scopace®). Also being studied are other medications that regulate the glutamate system, as does ketamine. These other medications appear to cause fewer or less severe side effects than ketamine, while still acting quickly to bring relief to patients with MDD.

Dr. Zarate’s team and others have already begun to identify several biomarkers, which will become very important for developing other rapidly acting treatments and possibly for personalizing treatments when such antidepressants become available for clinical use.

Further testing will offer more details on how the medications perform in different patient populations. For example, are there patients whose depressive symptoms are alleviated by ketamine but not by scopolamine and vice versa? How do the side effects of the two medications compare in different subgroups of patients?

“We know ketamine and scopolamine work rapidly in depressed people, and in people with treatment-resistant depression,” says Dr. Zarate. “It’s now a matter of understanding how they do this, and we are well on our way. These are not miracle drugs. Not everyone gets better. But when they do, it’s remarkable, dramatic.

You see people who have been depressed solidly for 30 years, and all of a sudden they feel they can work, they speak more confidently, as if a life-weight had been removed. These are quite exciting times!”