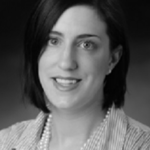 New data gleaned from learning-task experiments and fMRI imaging of young adults at clinical high risk for psychosis support the theory that problems in a particular brain circuit contribute to the disorganized thinking seen in patients with schizophrenia, according to a new report in the journal NeuroImage: Clinical.

The experiments allowed the research team to examine in detail a circuit in the cerebellum, at the base of the brain, while the circuit was active. They focused on the circuit’s role in producing “rules” and models during learning – procedures that make thinking efficient and powerful. The research was led by Jessica Bernard, Ph.D. of Texas A&M University, who received her 2014 Young Investigator grant as a Donald and Janet Boardman Investigator; the senior author was Vijay Mittal, Ph.D., a 2017 Independent Investigator at Northwestern University.

Dr. Bernard and colleagues examined 20 patients with clinical signs of being at risk for psychosis, along with 21 healthy individuals (average age 20), as they completed a learning task that involved matching colors to shapes. This task specifically engages the circuit of interest that runs between the cerebellum and the rest of the brain, called the cerebello-thalamo-cortical circuit (CTCC). The researchers collected fMRI imaging data on the participants during the initial learning period. Before and after learning, the participants were also challenged to complete the task while counting backward.

Participants who were at risk for psychosis performed less well, particularly when they had multiple tasks to complete. The rate of learning among this group was associated with severity of their disorganized thinking symptoms, the researchers noted.

According to the team, the fMRI results suggested at-risk individuals were more likely to rely on regions of the brain involved in the brain’s “default mode” network while learning. The default mode refers to brain activity patterns when there is no particular task to focus on – the brain’s activity while it is at rest. This result suggested to Dr. Bernard and colleagues that the at-risk young adults had difficulties in moving out of this mode to engage brain networks specifically needed for task learning.

Overall, the results suggest that young adults at risk for psychosis may use less efficient internal models for learning, or that they are less able to use the models they have, due to dysfunction in the cerebellum’s CTCC circuitry.